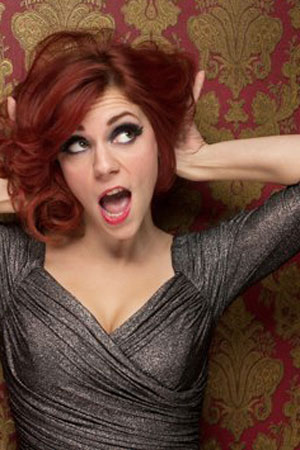 Jenny Deacon is Azure’s ridiculously talented female vocalist! Together with Azure’s saxophonist she makes up the ultimate 7-piece function band.

Beginning at a very early age, Jenny has been involved in an amazingly diverse range of music for more than 25 years.

A highly accomplished multi-instrumentalist, Jenny has a wealth of professional experience in pop, jazz and classical musical performance. She’s performed in concert bands, wind orchestras, symphony and jazz orchestras, even stepping in to the role of musical director for a number of theatre productions.

Jenny Deacon’s vocal talents have taken her all over the UK performing with professional bands, including some of the UK’s biggest and most prestigious venues. Highlights  include The Liverpool Echo Arena, The O2 Arena and The Birmingham NEC, as well as various TV appearances.

Most recently Jenny has found success with her very own three-part harmony band ‘The Lounge Kittens’. This highly original band quickly become an online sensation and led to numerous high profile performances including the Sonisphere, Glastonbury and Download festivals, and a stellar performance at Wembley Arena.

Amongst all of this, Jenny has still found time to pass on her vocal talents to many hundreds of aspiring singers in the south east; earning great respect as a much-loved vocal tutor.

Jenny has been a longstanding friend and professional colleague of Azure’s main vocalist Tom George. So when it came to choosing a top-flight female vocalist to make up the 7-piece Azure, there was really only one choice.

Jenny joined the UK’s top function band in 2015, bringing along her immense talents, fabulous voice and natural sense of fun.

What the bandleader says about Jenny

“Tom first introduced us to Jenny back in 2012 when we were performing at a Rock Choir event, with a hundred professional singers in the audience. She joined us onstage and gave an amazing impromptu performance of Valerie. We knew she was a formidable vocalist, but we were all still immensely impressed!”

“We’re so pleased that she’s now joined the band. She’s genuinely one of the finest female vocalists around and a lovely person too. Jenny and Tom also have such wonderful onstage chemistry, they’re really the perfect combination. We’re all looking forward to many future performances with Jenny!”