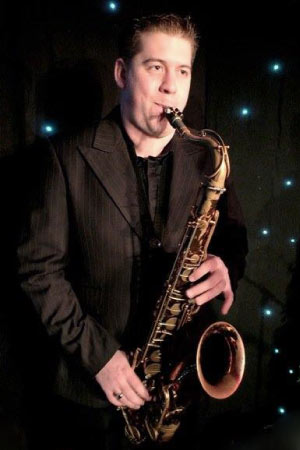 Nathan Hawkens is a remarkably gifted saxophonist, and the most recent addition to the Azure family.

Nathan began his musical education at an early age in his home county of Oxfordshire. Following years of dedication to his instrument, Nathan’s talent and hard work secured him a place at the highly prestigious Trinity College of Music, London.

It’s here where Nathan studied jazz under some of the UK’s biggest names in musical education, and cut his teeth performing with some of London’s finest young musicians. Three more years of hard work saw Nathan develop from an already gifted sax player to a formidable professional.

Since turning pro, Nathan’s career has flourished and developed in many directions. He’s performed both in the UK and around the world with some of London’s finest bands and jazz artists including Buddy Greco, Clark Tracey, Peter King and Steve Waterman.

Never being one to be pigeonholed, Nathan’s versatility as a musician has also seen him deploy his awesome musical talents in the world of pop. Recent performances with pop and soul acts include Peter Andre, Clare Sweeny and Clem Curtis.

In addition to his band and artist work, Nathan is among the top flight of musicians that perform regularly in the West End and on theatre tours. Recent theatre performances include The Blues Brothers, Showstoppers and The Tailor Made Man. Nathan has also performed extensively on the award-winning theatre smash Jersey Boys.

Nathan officially joined Azure in 2015, bringing his experience, talent and personality to the 7-piece band line-up. His superb saxophone skills along with Jenny Deacon‘s vocals, provide the ultimate enhancement to the already fabulous core band.

What the bandleader says about Nathan

“I first performed with Nathan back in 2013. He’s an awesome player and I was immediately impressed with his musical prowess. As everyone knows though, to be an Azure band member it’s not enough just to be a talented musician! Azure band members are happy, fun and enthusiastic. Nathan is all of these things and more. He has a wonderfully positive vibe both on and off stage. For all of these reasons, Nathan is exactly the right guy to step into the extended 7-piece band line-up. I’m delighted to welcome him onboard.”