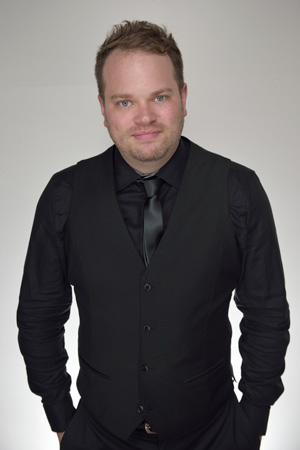 Tom George is Azure’s much loved and highly praised singer. After his graduation from The Academy of Contemporary Music, Tom achieved instant success when he turned pro, performing widely for function bands in London and Surrey. From these early days Tom’s career quickly grew placing him in the top league of working singers.

From Strength to Strength

Being such a versatile singer meant that Tom could meet the demands of almost any bandleader, producer or musical director. Since then, his talent has led him perform for audiences all over the UK, including some of the country’s most prestigious music venues. These have included The Hammersmith Apollo, The O2 Arena and even Wembley Stadium where he performed live for an audience of 82,000 people. Surely the ultimate achievement for any singer.

As well as his band and studio work, Tom was also snapped up by Rock Choir, the UK’s number 1 modern choir. He became principle vocal tutor and has trained many hundreds of singers in  London and Surrey. During this time he’s shared the secrets of his vocal skills with his usual warmth and modesty.

With his wealth of experience, Tom was always going to be the singer for one of the UK’s best function bands. Following just a single performance in west London, Tom became Azure’s lead vocalist in 2007. Since then he’s continued to delight audiences all over the UK with his talents.

What the bandleader says about Tom George

“Tom George brings so much to Azure,” says bandleader Stuart Bahn; “apart from his amazing singing ability, he’s a natural entertainer. His warmth and personality always connects with people. When the band performs at weddings or events, it’s like everyone in the room is our friend. Guests always have a great time, and so do we. This is a rare talent that Tom has, and something that no amount of training can achieve.”

Few singers have the skill or versatility to deliver such high quality performances over such a wide range of styles. Take a look at Azure’s showcase video to hear Tom’s fantastic voice for yourself.